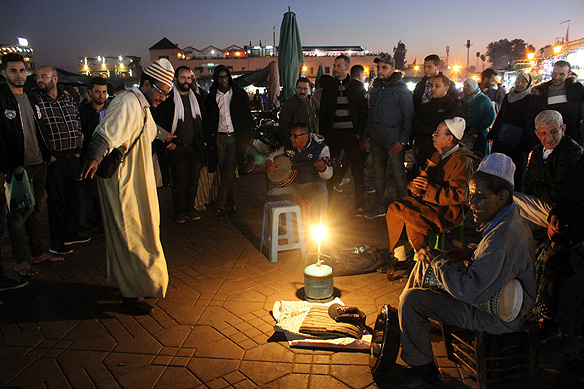 Nothing has changed in Djemaa el-Fna since 1070 AD, the largest square in Marrakech in the heart of Morocco.

Nothing at all. The uninterrupted storytelling. The cacophonic pantomime acts. The mesmeric snake-charmers. The rhythmic beat of the drums. The magicians and black magic “doctors.” It is where news was, and still is, exchanged and ideas are shared through the spoken word.

When Yusuf Ibn Tashfin, the desert warrior king, laid the foundations of his Almoravid dynasty’s capital city 20 miles from the foothills of the Atlas Mountains, little did he envisage its city square would live on a thousand years. He had christened the city Marrakech meaning “land of god,” and the square Djemaa el-Fna meaning “assembly of the dead.” The latter served as a site for public executions back then.

As the day weaves into the night, the living sound today, as then, rises to a crescendo only to…

Your Destination is Our Commitment!

drishtikona.com: My online journal with thoughts, opinions, comments and more..

An opportunity to learn, inspire, contribute and invest in Africa

BlackPast is dedicated to providing a global audience with reliable and accurate information on the history of African America and of people of African ancestry around the world. We aim to promote greater understanding through this knowledge to generate constructive change in our society.